Foreign investors have been dumping Chinese stocks on fears the Chinese Government’s recent policy changes will unwind the country’s two decades of economic successes. Experienced China investors took advantage of the selloff to accumulate positions in both Tencent and Alibaba, with both stocks rebounding by 15-20% through September.

But just as market sentiment began to settle, rumours quickly spread that the impending collapse of a Chinese real estate developer, China Evergrande, risked triggering a financial crisis in China. Foreign investors have panicked again. Alibaba and Tencent have fallen back down towards August’s share price lows.

But we don’t believe the China Evergrande crisis will lead to a major financial crisis in China.

What are the facts surrounding Evergrande?

There is no doubt China Evergrande is an important company. But it is a relic of the old ‘high leverage, high growth’ China model that allowed property developers to aggressively acquire land reserves through favourable bank loans.

The company is the second-largest Chinese property developer of high-end and mass-market apartments across mainland China. They have a land bank of 214 million square meters in 233 Chinese cities (equivalent to 75x the size of Sydney’s CBD). China Evergrande has also diversified into new business opportunities, including sports (they own the Guangzhou soccer team), tourism, healthcare, banking, food, and even electric vehicles.

Much of China Evergrande’s problems stem from its need to invest substantial capital into these alternate business opportunities, which has diverted vital cashflow away from its property business.

As rumours of a liquidity crunch at Evergrande spread, locals stopped buying Evergrande’s property developments, placing further strain on its dwindling cash reserves. With substantial short-term loans due, domestic banks then began to call in their loans to the developer, forcing Evergrande to sell assets ranging from its mineral water business to their land holdings.

In 2017, Chinese President Xi commented at the 19th Peoples Party Congress that “housing is for living, not for speculation”. His comments reflected the government’s efforts since 2016 to lower property price inflation which had made housing unaffordable for many Chinese families. The government had introduced policies such as restricting the sale of residential properties in China’s largest cities within 2-3 years after purchase.

It was in 2017 that the Government gave property developers until 2021 to cut their leverage by lowering their total debts and raising cash reserves. China Evergrande’s recent financial results show the company had total short-term bank loans of US$37 billion, which were supported by cash reserves of only US$14 billion, a clear breach the government’s 2021 policy guidelines. So China Evergrande is somewhat of an outlier.

The Chinese Government’s policy moves have also somewhat insulated the broader economy from its property sector, so Evergrande’s woes are also unlikely to spill into a wider economic crisis.

Recent data from the PBOC (People’s Bank of China), as shown in the chart below1, highlights that total banking loans to the property sector is 28% of total bank lending, with mortgage loans 21.4% of lending.

The credit exposure of Australian banks to the domestic property sector is substantially higher than Chinese Banks. Westpac Bank, for example, has 70% of its total loan portfolio exposed to the property sector (with a similar figure across all local banks).

China has not only reduced the risk of a property crash impacting its financial sector by managing bank’s exposure to the property sector, but it has also ensured sufficient loans are available for borrowers in its industrial and consumer sectors.

The Lehman moment or global financial crisis that occurred in 2008 resulted from over-lending to the US housing market at exceptionally low interest rates. When the US Federal Reserve tried to reign in rising property prices by raising interest rates in 2006, property prices crashed by 30%, triggering widespread home loan defaults.

A US and Australian property crisis?

We are not seeing a Chinese property price bubble, nor are we seeing prices fall (see charts below).

The Chinese government’s property tightening measures since 2017 are working well. Housing price gains have averaged just 5% per year since 2018, a big slowdown from average annual growth of 18% over the 5-year period from 2012 to 2017. Maintaining the mortgage borrowing rates above 5% and loan deposit requirements of 30% has driven much of this policy success. 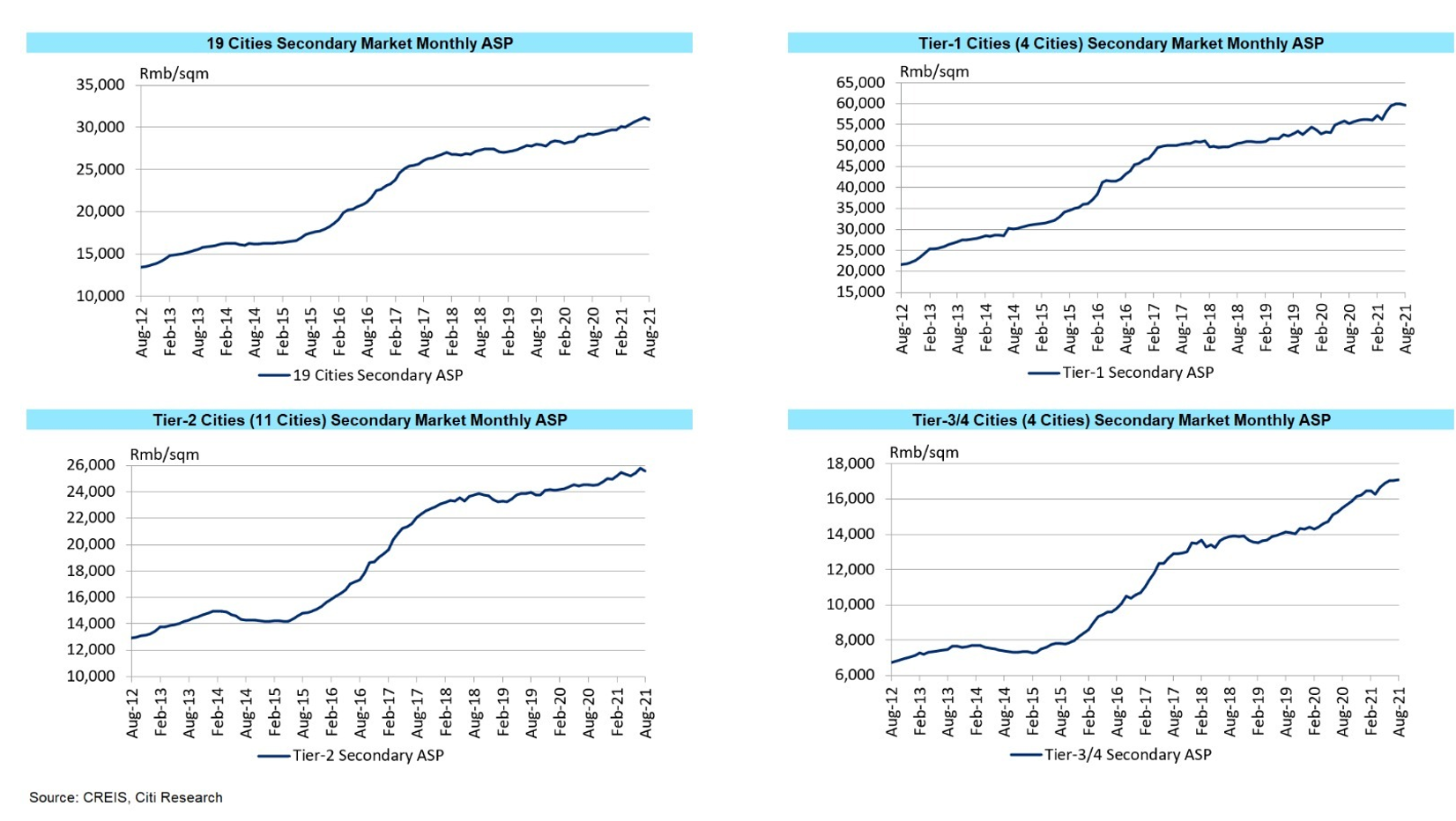 Just two Chinese property developers, China Evergrande and Guangzhou R&F, failed the governments liquidity test requirements in July 2021. Their ability to borrow additional funds has been limited until they make enough asset sales to bring their leverage ratios back in line with policy guidelines.

A slowdown in property sales in China over the remainder of 2021 could see additional property developers slip below these guidelines. But a fall in total leverage across developers from 73% of assets in 2019 to 61% in July 2021 suggests that risks to the financial sector and the broader Chinese economy remain well contained.

The market’s over-reaction to China news again provides experienced China investors with the opportunity to increase their exposure to the best listed equites, with the leading technology companies of Alibaba and Tencent trading near record low valuations. When the smoke clears, both offer substantial share price upside based upon past episodes of foreign investor-led selling over the past decade.

With US interest rates below 1% for much of the past decade, excessive lending to the property sector (over 50% of total commercial loans) has once again caused runaway US housing prices, which are up 100% over the past 10 years and 21% in the past 18 months.

This begs the question: is there potentially more risk of another property crisis brewing in the US and Australia, than in China?

This insight was published in The Australian on Saturday 25 August, 2021. How do Governments and Central Banks influence Money?

The COVID-19 pandemic has unleashed a global slowdown never before experienced. As countries went into lockdown during 2020, governments and central banks were forced to implement unprecedented economic support programs, likely to cost US$50T, in order to cushion the...