During this year’s Holon Guide to Better Investing, we have outlined several principles that are important to building a sustainable long-term investment portfolio.

We started with how to identify great investments, then provided some insights on financial statements, models, and cash flow. We concluded with our thoughts on assessing innovation within a portfolio.

This should all provide you, as an investor, with a very broad understanding of some of the key inputs and principles that lead to better investing.

Ultimately, that knowledge can be applied across the range of various ways investors can value a company, such as discount cash flow (DCF), Sum-of-the-Parts (SOTP), and basic multiple/comparable company analysis.

It is important for investors to understand each valuation methodology because each has its pros (and cons), can serve different purposes and – quite often – can lead to a different valuation. An over-reliance on any one methodology could yield wildly different results. 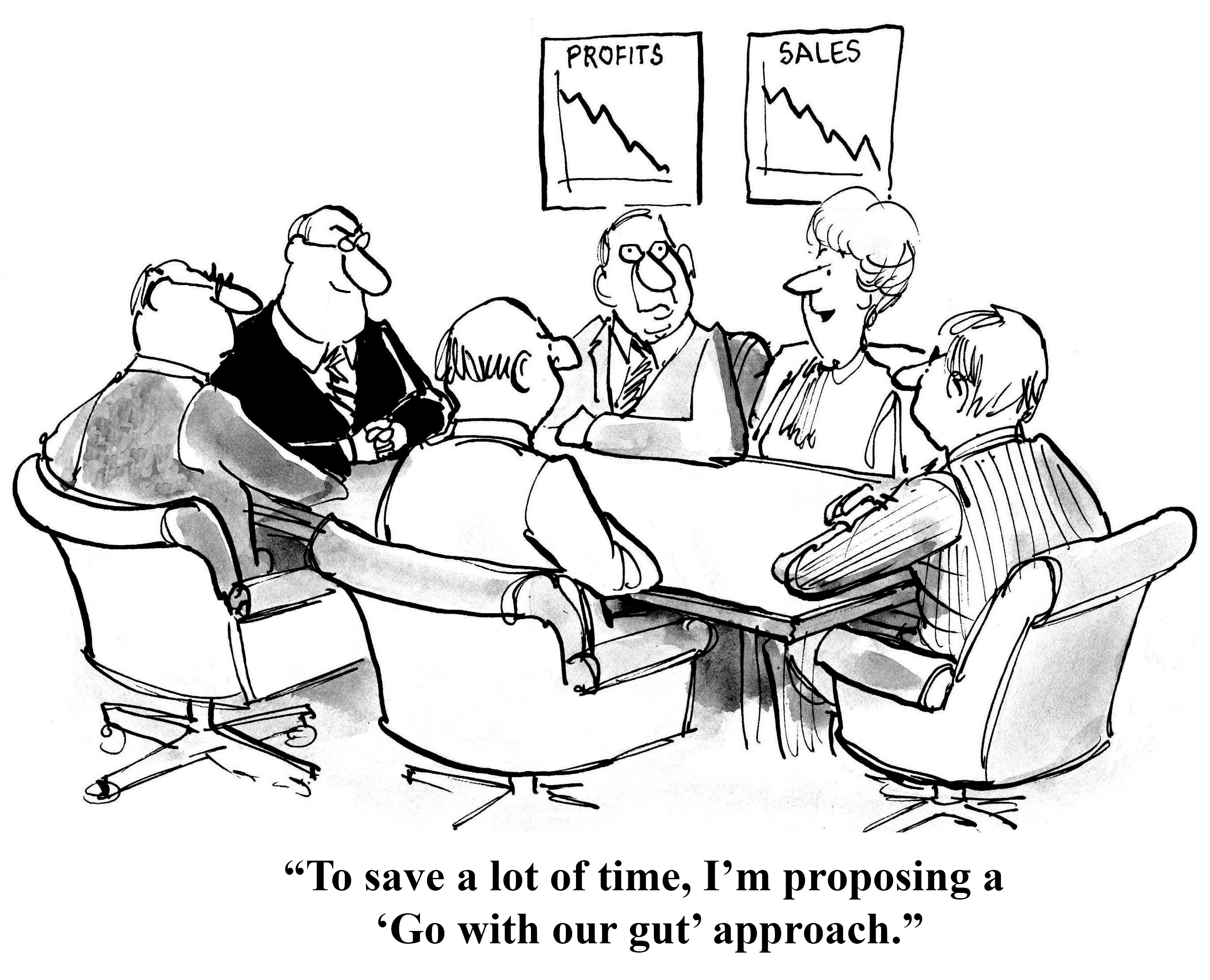 In this piece, we provided some high-levels views on the stages of DCF forecasting and how this valuation method comes together.

Investment teams, including Holon’s, often default to the DCF model due to it being both thorough and complete. In a nutshell, a DCF generates a present value of a company based on the expected cash flow generated over its lifetime.

It is therefore best suited to companies with predictable cash flows and profitability, with low volatility (i.e., infrastructure, property trusts, and telcos).

A pipeline or toll road operator, for example, has certain predictability (vs other sectors) regarding its income, gross margins, capital expenditure, earnings, and cash flow. This stability means less variability and makes it easier for investors to make more accurate inputs and assumptions in their forecasts. Another positive of a DCF model is the level of granularity: individual segments can be broken down line-by-line, with analysts able to build out quite detailed assumptions and varying scenario analyses.

However, this can also lead to a “granularity trap”, where many analysts build out thousands of lines of data over multiple worksheets, leading to even greater complexity.

It’s therefore important to take a couple of steps back to determine which factors have the greatest impact on the bottom line rather than solving for every scenario.

Other cons of the DCF include:

However, all-in-all, a DCF model can be a very compelling tool if certain pitfalls are avoided. We also recommend looking at the sensitivity of a company’s DCF valuation versus various inputs such as the discount rate, terminal growth rate (the constant rate that a company is expected to grow at forever), gross margin, etc. Often, the smallest change to one of these inputs can create wildly different outcomes (so be cautious).

Looking at a company’s multiples can provide a very quick view of how cheap/expensive a company is compared to peers.

The most common multiples used are:

Figure 1: WeWork – be careful of the EBITDA 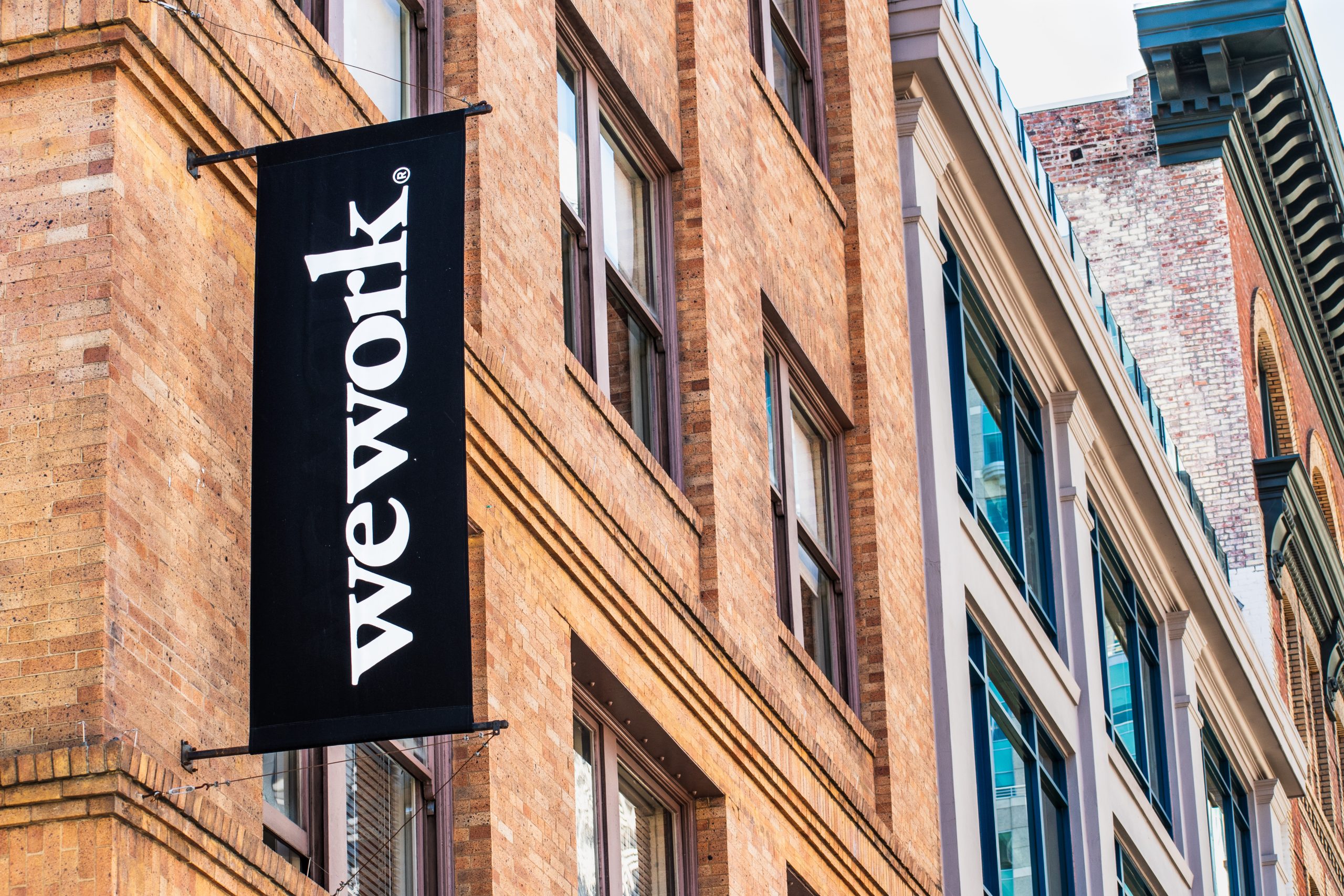 If we look at some of the largest global tech companies (Figure 2) it’s quite evident that there are a handful of companies that are ‘cheap’ and a handful which are ‘expensive’ purely based on multiples. However, jumping to such a conclusion, in isolation from other facts, is unwise. There are multiple other factors to consider which may lead to such variability. 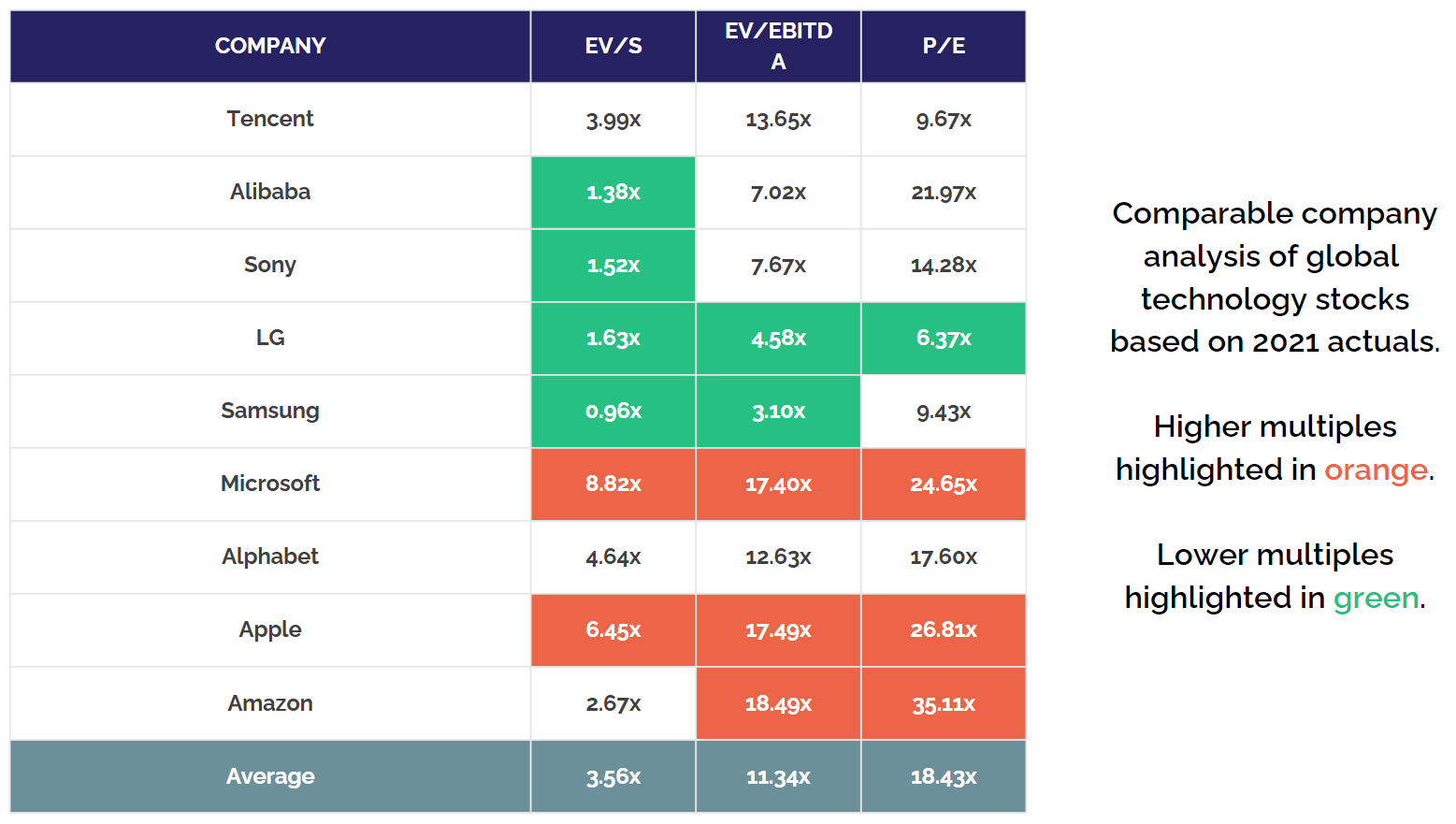 Adverse geopolitical, economic, and regulatory conditions, for example, may cause companies in ‘Country X’ to trade at a temporary (or permanent) discount to companies operating in ‘Country Y’ where the environment is more stable. Markets such as South Korea also have quite complex holding company structures which invariably weigh on company valuations (more on this below).

Further, there may be other sector or company-specific factors which weigh on valuations. Declining sales, high staff costs, litigation, declining margins, loss of key clients/markets, and competition. The list goes on.

On the other side of the ledger, we have companies that appear to be expensive relative to their peers. Again, as with cheap(er) companies, it would be unwise to jump to a conclusion without looking at other factors.

In the case of expensive companies, there may often be a reason why they trade at such a premium. That includes favourable geopolitical and economic conditions as well as company-specific factors. For example, companies experiencing higher levels of growth (or expected growth) will often trade on higher multiples. Many emerging electric vehicle companies trade on very high multiples because investors believe future sales will be considerably higher than current sales. So comparing the multiples of an emerging EV company to those of Toyota would be, put simply, incomparable.

Other factors which may lead to higher multiples include companies that are particularly dominant in their chosen sector(s) and companies seeing consistent year-on-year improvements in margins, free cash flow and profitability.

The SOTP model, often referred to as Net Asset Value (NAV), is often used to value companies that derive a lot of their value from various public and private business units.

Such companies, often referred to as holding companies, include organisations like Naspers, Prosus, Toyota, Hyundai, Samsung, Softbank, Swire Pacific, and after the Porsche listing, Volkswagen.

Let’s look at an example.

On its website, Softbank has provided a valuation that is derived by adding the value of its listed holdings (i.e., Alibaba and Softbank Corp) to private companies (i.e., Arm) as well as other parent -level assets such as its Vision Funds; and then finally deducting net debt (short-and long-term debt less cash).

The sum of this is known as the SOTP or NAV. According to Softbank’s numbers (as of June 30, 2022), and adjusted for listed share prices, the SOTP looked like this (Figure 3): 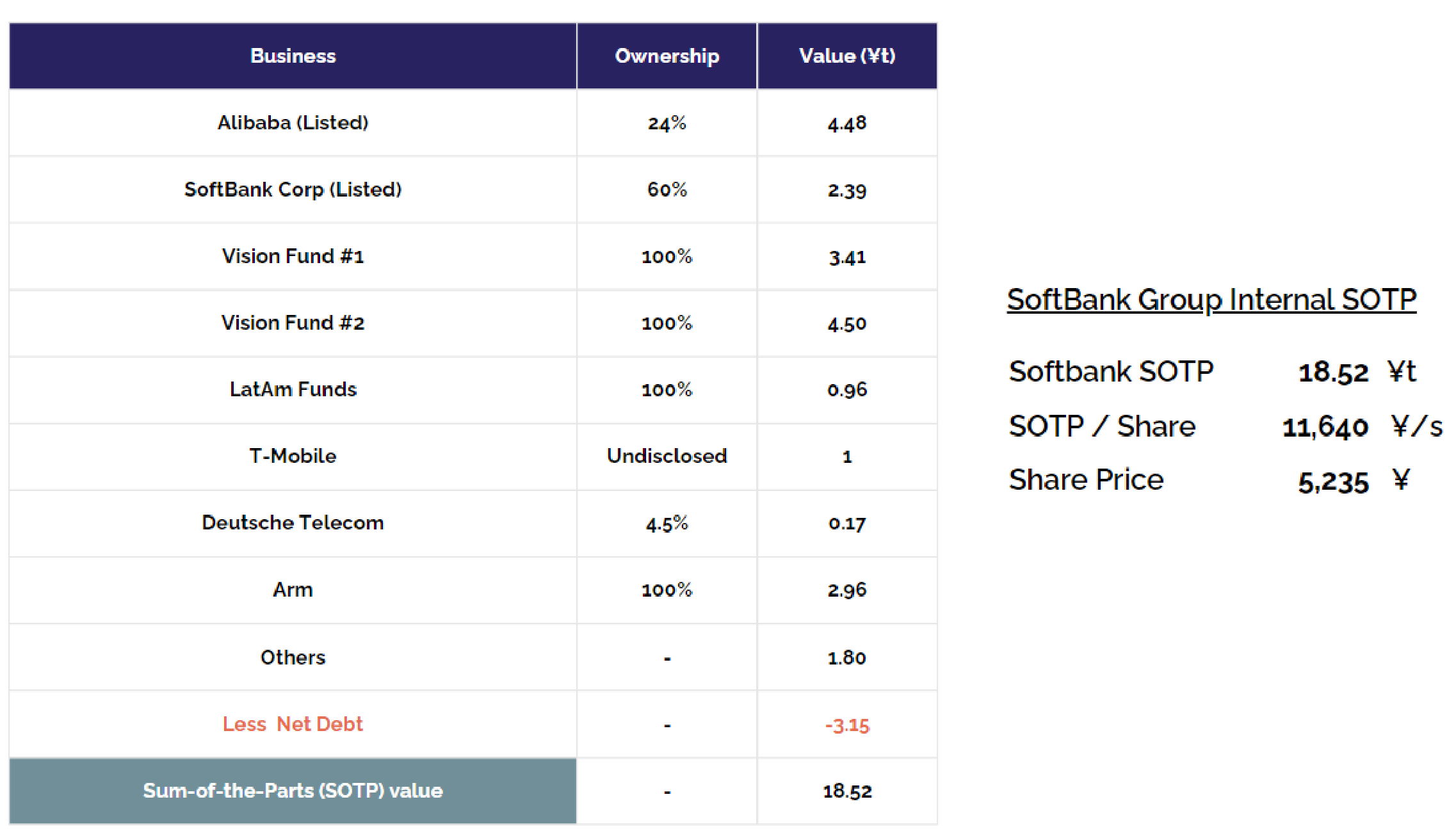 What this tells us is that according to Softbank, the total value of all of their assets (less debt) was worth ¥18.52 trillion (~US$127 billion) as of June 2022. By comparison, Softbank’s share price at the same time was ¥5,235, with Softbank’s numbers implying a 55% discount.

At face value this is “cheap”. However, holding companies quite often trade at a substantial discount to their asset value – often in the range of 25-60% depending on factors such as the level of complexity, management’s ownership level in subsidiaries, propensity for a special dividend/corporate action, etc. If Softbank were to sell Arm, reduce it’s holding in Alibaba and pay out a sizeable special dividend, then the discount to NAV would likely narrow substantially (or at least move to ~50%).

When valuing unlisted businesses (like Arm) most analysts would either take the most recent public valuation or apply a multiple (i.e., P/E) to that business unit’s expected forward earnings. Some may also do a DCF analysis of the Arm business, which they will then incorporate into the NAV.

As an investor, you have many tools at your disposal to determine the fair value of a company (There are other tools, but we will avoid going into too much complexity for now).

It’s crucial to understand when various methodologies are appropriate, and when they are not. It is far more straightforward (and often reliable) to predict the earnings and valuation of a profitable company, with steady growth, as opposed to a company that is in the earlier high-growth phase of its journey.

A simple multiple, whilst easy, does not provide any level of detail and as such, will miss very important points relevant to ascertaining a true understanding of value.

On the other end of the spectrum, a DCF model provides endless detail, but is time-consuming and, despite its thoroughness, can often be highly sensitive to a handful of assumptions. This is important to note not only in your own valuation work, but in understanding and trusting the assumptions made by third parties.

Finally, it is often best practice to use various valuation methodologies during the evaluation process. For example, a NAV can complement a more detailed DCF analysis, whilst second checking multiples can give you a very broad view of a company’s relative value to peers (or the stock’s historic performance).

The tools are there – now it’s over to you.

This article has been prepared by Holon Investments Australia Limited (ABN: 45 648 884 164, AFS Licence No: 532669) (“Holon”). The information provided in this article is general in nature and does not constitute investment advice or personal financial product advice. This information has not taken into account your investment objectives, particular needs or financial situation. Before acting on any information contained in this article, each person should obtain independent taxation, financial and legal advice relating to this information and consider it carefully before making any decision on recommendations. Investing involves risk including the risk of loss of principal. Please note that investments in securities are subject to market and other risks and there is no assurance or guarantee that the intended investment objectives will be achieved. Past performance is not indicative of future performance. A security investment return and an investor’s principal value will fluctuate so that, when redeemed, an investor’s shares may be worth more or less than their original cost. Holon, its officers, employees and agents believe that the information in this material and the sources on which the information is based (which may be sourced from third parties) are correct as at the date of article. While every care has been taken in the preparation of this material, no warranty of accuracy or reliability is given and no responsibility for this information is accepted by Holon, its officers, employees or agents. Except where contrary to law, Holon excludes all liability for this information. Energy inflation: Why Germany’s gas reserves are unlikely to come to the rescue this winter

How Germany’s ‘gas reserve rescue’ myth could rock already fragile markets Most investors understand that Germany is highly dependent on Russian gas, which met 49% of its gas usage in 2021. In August 20221 the German government announced it... Holon’s collaboration with Protocol Labs was featured in The Australian Financial Review, “Filecoin working with Holon on decentralised computer storage network”, 25th June, 2021.  Below is an extract, the full article can be accessed here. . . . ....