Home Insights Are US equities at risk of a Japanese-style lost decades decline? A Holon Special Report

When will the stock market bottom?

After a savage sell-off, particularly in the US, many investors are wondering when stocks will find a floor and begin their rebound.

But they are ignoring a real risk that haunts students of markets: the debasement of equity markets. Debasement occurs when investors shift capital away from one financial market towards another. Resembling a death of a thousand cuts, this often begins with a slow trickle and then gathers steam over the ensuing decades ahead. It is always in response to a combination of market excesses, rising debt levels, and extremely overvalued markets.

Could debasement now be happening to the US?

The lost decades of Japan

The poster child of equity market debasement is Japan, which as of August 22nd, remains 26% below the all-time index high reached in November 1989.

If we take a closer look, we can identify several key characteristics1 that indicated the extreme valuation of Japanese equities in 1989:

The wealth destruction has been immense.

In Figure 1, we assess the absolute loss of purchasing power that has occurred for an investor since this all-time high (ATH) was reached as well as the impact of inflation on the value of funds invested. We have used changes in the price of gold bullion to estimate inflation, principally because of its availability and long history of protecting investors’ purchasing power. 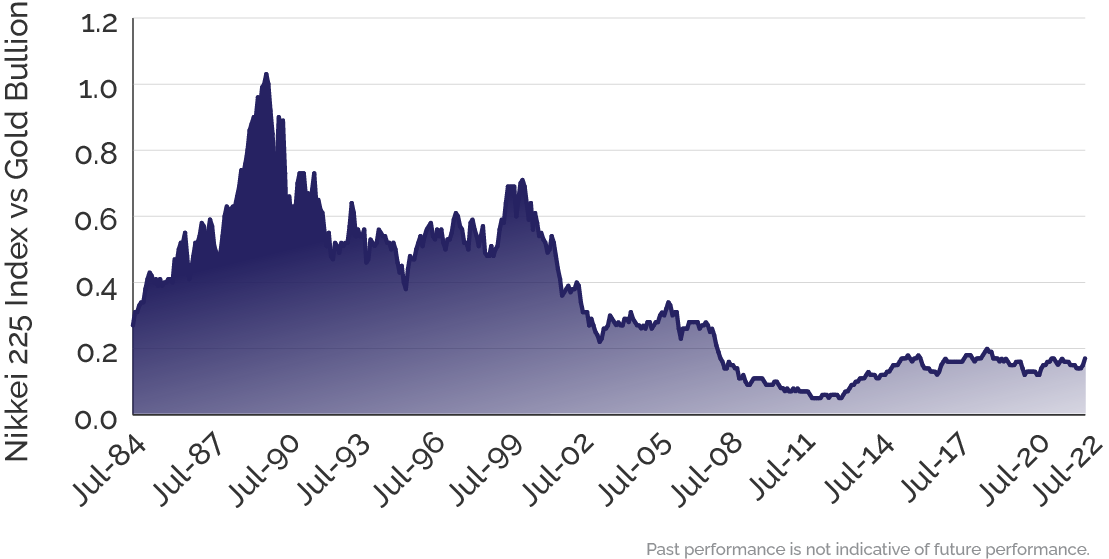 As you can see in the chart above, which uses the price of gold bullion to estimate inflation, purchasing power since the Nikkei’s 1989 peak crashed 83% over the past 33-year period. The chart also illustrates that the Bank of Japan’s attempts to stimulate asset prices since 2003, achieved through infrastructure spending that resulted in Japan’s government debt growing from 122% of GDP in 2003 to 270% in 2022, has had little impact on asset price performance.

What other global equity markets have suffered the same fate as Japan?

Japan is not an isolated case of equity market debasement.

Figure 2 below summarises the total loss of purchasing power if an investor continued to remain invested in the Hong Kong Hang Seng Index, the MSCI Emerging Markets index, and the Europe’s Euro Stoxx 50 index after their respective all-time highs.

How much have dividend payments cushioned the loss of purchasing power?

The latter reinvests any after-tax dividends paid out by each company included in the index back into the underlying index, while the former assumes dividends are paid out to investors with each component members share price adjusted lower to reflect the dividend payment. As a result, a net return index will always outperform a total return index. 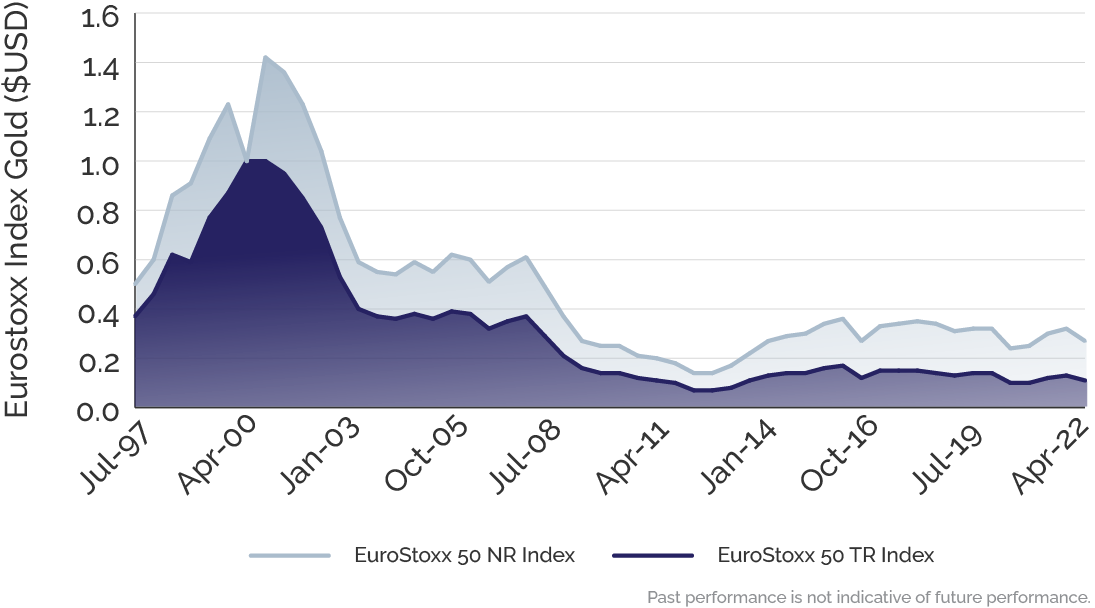 This is shown in Figure 3 above. Here we see the inflation adjusted net return index (grey line) outperforming the total return (blue line) index for the Euro Stoxx 50 index since its all-time high in March 2000. However, this is a moot point, with an investor still losing 73% in the net return index, verses an 89% loss when removing the impact of dividend reinvestment on performance.

The same will also hold true for the MSCI EM, Nikkei and Hang Seng indices.

Are there common issues across each of these debasement examples that investors can apply to the future?

Three things stand out as worth considering here:

A caveat here is that global debts in the 2020s are substantially higher, particularly in the G7 nations with a combined debt/GDP of 163% in 2022, along with current account deficits approaching 7%. Have we now reached a level where investors will begin to reduce exposure to G7 markets on fears of government debt? Time will tell.

Corporate debt/GDP reached 130% in Japan in 1989, against 100% in China in 2007 and 100% in Europe in 2000. With borrowing costs held artificially low over the past decade as governments tried to manage ballooning debt levels, corporate debts globally have also risen.

What was common amongst each index before debasement was extremely high valuations prior to the selloff.

The collapse in equity markets from all-time highs led to a substantial compression in valuation multiples, ranging from 55% for the MSCI EM index to 67% for the Nikkei 225.

So what triggers investors to switch from greed to fear and start to sell investments in one market in favour of another?

Common across most of the examples mentioned above are excessive market valuations, but the range of PE multiple reached before the debasement commenced ranged from 25x for Hong Kong to 58x for Japan. The final ‘mania’ phase of a bull market, characterised by investors speculating that markets can only continue to go higher, often generates substantial returns for investors, making it difficult to sell-out too early. This suggests that paying close attention to market valuations and slowly selling out of positions as valuations become excessive is the best approach to limit the damage from debasement.

Drumroll…will the US be next?

Are we about to see US equity markets enter a similar period of debasement? 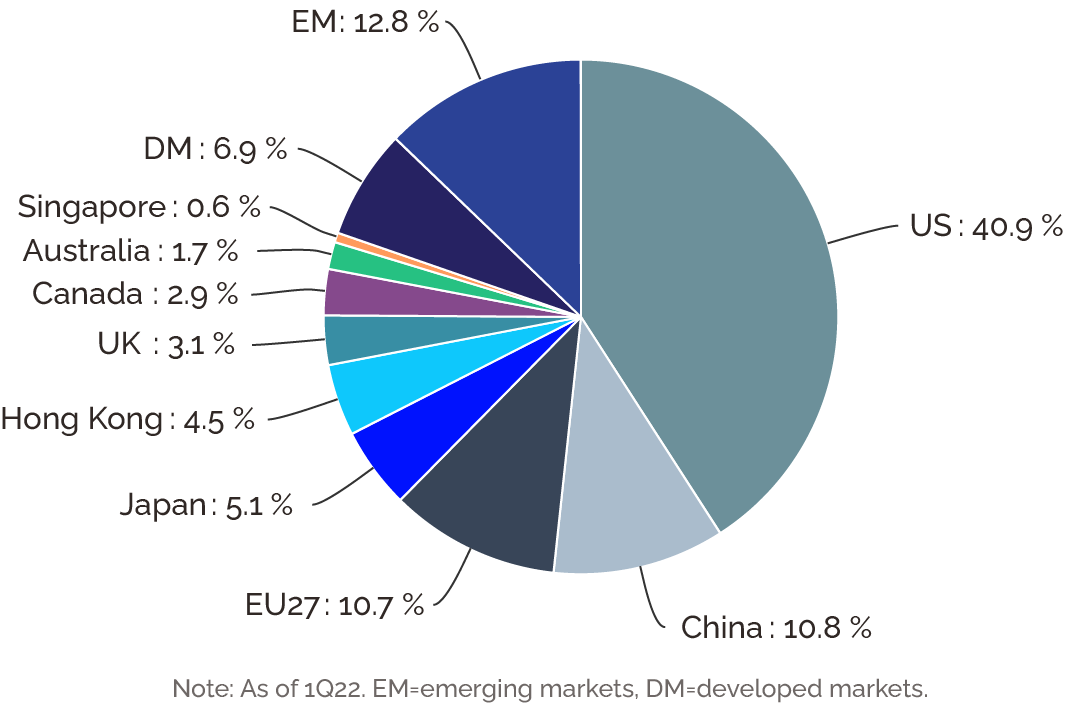 Foreign portfolio holdings of US equity and fixed income securities also grew substantially from US$9 trillion in 2010 to US$27.2 trillion by June 2021, split evenly between fixed income and equities markets.

US debt/GDP is also approaching 140% in 2022,8 while the US current account looks set to breach 10% over the next few years if US interest rates continue to rise.9

This poses a serious question for investors: can the US economy navigate through an increasingly uncertain economic decade while also convincing investors to maintain exposure to US assets?

Another major issue that investors will need to carefully monitor is the impending launch of a BRICS reserve currency that is planned for 2024.10 This will eventually pose a significant challenge to the US dollar’s century-long reign as the sole global reserve currency. If a BRICS-centric reserve currency is quickly adopted this decade, we expect it will lead to a decline in US equity market valuations, primarily because it will confirm to many investors that the US-centric global economy is in long-term decline.

Finally, the P/E multiple for the US Nasdaq 100 currently sits at 24x. Relative to the US, other markets are undervalued, including just 10x for the Hang Seng index, 13.8x for the Euro Stoxx 50 index and 14x for the MSCI EM Index.

That suggests the conditions are in place for a portion of the US$13 trillion of foreign capital invested in US equity markets to begin shifting towards alternate markets that offer a better risk/reward profile over the next few years.

The extent of these flows will almost certainly depend on the speed at which investors accept the BRICS+ (or Team B)11 investment alternative.

The overvaluation of US markets relative to other major regions, such as China and the emerging markets that have already faced a period of prolonged market debasement, as well as US$27 trillion of foreign capital invested in the US, suggests the US looks increasingly vulnerable to market debasement.

The speed of this occurring will depend on the extent to which investor fears over US economic decay grow, as well as the risk/reward profile of other investment opportunities in large markets like China and India.

Investors need to do their homework and consider reweighting equity portfolios over the next few years towards China, India and SE Asia that offer higher long-term growth and substantially cheaper market valuations.

Disclaimer: This publication has been prepared by Holon Investments Australia Limited (ABN: 45 648 884 164, AFS Licence No: 532669) (“Holon”). The information provided in this publication is general in nature and does not constitute investment advice or personal financial product advice. This information has not taken into account your investment objectives, particular needs or financial situation. Before acting on any information contained in this publication, each person should obtain independent taxation, financial and legal advice relating to this information and consider it carefully before making any decision on recommendations. Investing involves risk including the risk of loss of principal. Past performance is not indicative of future performance. Holon, its officers, employees and agents believe that the information in this material and the sources on which the information is based (which may be sourced from third parties) are correct as at the date of publication. While every care has been taken in the preparation of this material, no warranty of accuracy or reliability is given and no responsibility for this information is accepted by Holon, its officers, employees or agents. Except where contrary to law, Holon excludes all liability for this information. Let’s be honest, we’ve all been a bit alert, and alarmed. For investors, the prospect of rising inflation creating serious headwinds on investment performance in 2022 feels very real. These fears are understandable; after inflation recently hit 40-year highs... Part 9: The Five Characteristics of a Resilient Company

“Resilience is all about being able to overcome the unexpected. Sustainability is about survival. The goal of resilience is to thrive.” – Jamais Cascio, author and futurist As we enter a turbulent economic outlook with a risk of recession,... 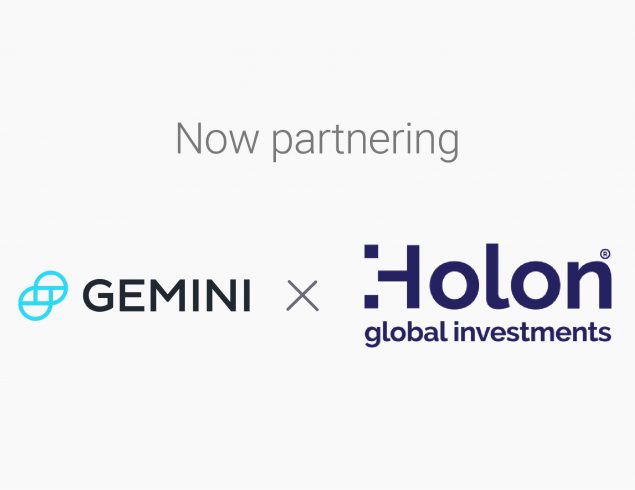 PRESS RELEASE 0800 AEST 4-Aug-2021 Holon Global partners with Gemini to launch Wholesale Filecoin Fund Leading Australian fund manager Holon Global is inviting investors to participate in the growth of one of the most important innovations of this decade...